Charity Begins in the Back Garden

One of the nice things about reporting is that it takes you places and introduces you to people that you might not otherwise meet.

So the other day I was down in Seaford on the Sussex coast West of Eastbourne to grab some audio for a piece I’m doing for Click! on the BBC World Service. It’s going to be about how social media is changing charitable giving.

Once upon a time giving to charity pretty much meant putting a cheque in the post, dropping a coin in a bucket or baking a cake for a sale at a local hall. 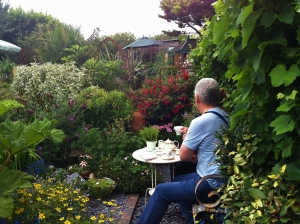 These days the nature of engagement with charities is changing.

This is probably most apparent with the under 35s. People are increasingly avoiding getting caught up with very hierarchical organisations in terms of joining up and being organised into things. Instead they’re far more focused on organising their own events, on ad hoc participation, or on the social aspect of fundraising; they want to have fun while raising money, they want to make new friends and they want subtly to enhance their standing with their own social circle. Call it personal brand building.

But it’s not just the under 35s who are picking up on these trends. Geoff Stonebanks has an award winning small garden behind his Seaford bungalow and he raises thousands of pounds every year for the cancer charity Macmillan. His garden is amazing; an example of just how much variety and colour you can squeeze into a small space. It wouldn’t work out here in my corner of the Weald. I go with wild and unkempt both from preference and because it’s the only way to handle this sort of environment. But Geoff’s garden is a labour of love and a reflection of his generosity.

1 Response to Charity Begins in the Back Garden